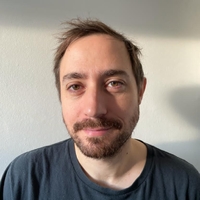 Biography
Jon Weinel is a London based artist/researcher whose main expertise is in electronic music and computer art. In 2012 he completed his AHRC-funded PhD in Music at Keele University regarding the use of altered states of consciousness as a basis for composing electroacoustic music. His electronic music and audio-visual projects have been presented internationally, and in 2018 his book Inner Sound: Altered States of Consciousness in Electronic Music and Audio-Visual Media was published by Oxford University Press. He has held academic posts in the UK and Denmark, and currently lectures at the University of Greenwich.
Presentations
XR
Cyberdream: An Interactive Rave Music Visualisation in Virtual Reality